The New Zealand Hereford Association – an incorporated society, was formed in 1896. It currently has over 400 members in total and approx 18,500 registered, performance recorded Hereford cows recorded in the Association’s Herdbook.

Its primary objective is to “promote the Hereford breed within New Zealand,whilst maintaining the integrity/purity of the breed”. Many resources are directed towards national marketing programmes and research and development, both areas effectively progressing the strategic market position NZ Hereford’s currently holds in NZ.

The Association is governed by a twelve person Council, which is responsible for setting Association policy and determining the future direction of the Hereford breed in NZ. Councilors represent the voice of NZ Hereford breeders nationwide, with each Councilor representing a region (Club) from around the country. Council elections are held annually, with individual councilors coming up for re-election on a two-year rotational basis. President, Vice-President and Treasurer positions are all two-year terms.

What the Association Offers

The New Zealand Hereford Association is devoted to the promotion and development of the breed in New Zealand. The information and assistance it provides is designed to give members an edge over competition and improve investment return, whatever their level of interest in the breed.

Total pedigree and performance recording - pedigree recording ensures members records are correct and traceable at all times and each animal is issued with an individual certificate of identification.

Genetic Evaluation - membership of the Hereford Association entitles access to Breedplan, a computer-based genetic evaluation package which generates Estimated Breeding Values for individual cattle based on performance measurements. A full back-up training and technical service is provided to ensure members understand Breedplan and can use it to market their cattle.

Experienced Staff - Staff are available to offer professional advice on various matters, including enquiries relating to bull and female selection, embryos or semen.

Promotion - Members of the Hereford Association will receive publications and promotional material produced by the Association. Members are encouraged to advertise in the full colour annual breed magazine and to send in names of their commercial clients to also receive a free copy. Members receive a newsletter every two months which keeps them up to date with Association and beef industry issues. Technical bulletins and other promotional material are also produced and made available to members. Press releases to the media from the Association inform them of Association and Hereford news and promote Hereford cattle to the beef industry and general public.

Study Tours - The Society promotes organised study tours in Australia and other countries, with particular interest focused on The World Hereford Conference, staged every four years at varying localities. These tours are available to anyone with an interest in the breed, with group travel concessions and the provision of excellent industry contacts. The National Tour is organised in a different club area each autumn and many of the clubs also hold an annual local tour.

Shows - Members of the Hereford Association take an active role in showing Hereford cattle at A & P shows around the country, and the Association supplies prizes and rosettes for many of these occasions, which are a vital “shop window” for the industry.

National Sale - Members of the Hereford Association are entitled to enter bulls and females for sale at the National Beef Bull Week show and Sale held annually in Palmerston North where the countries top stud and commercial bulls are sold.

History of the Association

The very first importations of pedigree Herefords had arrived from England by sailing ship in 1869 brought in by R & E McLean of Bleak House, Howick, Auckland. Every McLean was great great grandfather to Derek Barker, Acton and Mrs Leslie Humphreys, Wilencote.

Col. Whitmore from Hawkes Bay was also an early importer of Herefords. Cattle from these studs included the well known families of today - Amethyst, Princess, Leonora and Graceful: their family trees being recorded by our Association for over 100 years!

The Waimahaka Stud was founded by James Holms in 1877, from some of these female bloodlines, being the first pedigree herd in the South. The Holms’ descendants have been especially influential in the Hereford expansion in the South Island.

From that time through to the early 1900s, importations from England and also from Australia by J Stuckey, G F Moore and E Short were very influential in forming the sound base of many New Zealand studs of today.

From 1920 to 1948 there was a decided drop in the number of importations of cattle from the United Kingdom. By and large, this was the result of adverse conditions during the Second World War, which occurred during part of this period. Also an embargo was imposed against the importation of cattle because of outbreaks of foot and mouth disease in the ‘Mother Country’. The embargo from England was imposed in February 1922. It was finally lifted in 1947.

During this period however, several breeders made importations of Hereford cattle from overseas, through Canada, USA or Tasmania. The names of these breeders are familiar to Hereford breeders today: -

In 1929/30 a notable milestone in the history of the New Zealand Hereford Cattle Breeders’ Association was laid. The Council decided to accept polled Herefords for registration in the Herd Book. This commenced with Vol.33. Thus the Association had both horned and polled breeder members, all working for the common goal of better Herefords.

Horned and polled herds were registered in one volume, but in two separate sections of the Herd Book, a feature unique in the Hereford breed throughout the world.

The first polled Hereford to come to New Zealand was the bull Royal Gem, imported in 1929 from USA, by F E Humphreys of Gisborne, followed the next year by the cow, Dora Willdale, to to the same breeder. In 1930 G F Moore, of Bushy Park, imported four bulls, King Fairfax, Prime Anxiety, Prince Anxiety and Beau Blanchard 48th. Much credit is due to Mr Humphreys and also to Mr Moore, for their courage and enterprise in introducing these cattle into the country.

During 1949 D Tynan of Glen Anga, I A Barnett, Kaitoa, and H K Rendell, Makuru, went to America and selected several bulls. They found that suitable animals were not easy to procure, selection being restricted because many of the better bulls were too light coloured for New Zealand conditions.

Horned Herefords had a shot in the arm during the year 1949 with the imporation by T M Alexander, Wanganui, of a bull and seven females with strong English blood, including the Supreme Royal Show Champion Hereford for that year.

The following decade saw importations by Messrs R W Cowan, and E T Buckley. In 1954 a shipment arrived in New Zealand consisting of a bull and five heifers imported by E Edmunds, Tuatapere with the object of founding in this country another Hereford herd of direct English descent.

History was made in 1956 when a consignment of polled cattle was shipped back to the home of the breed in Great Britain. There have been many substantial consignments of pure-bred heifers to a variety of destinations.

Cattle have been exported from New Zealand to many countries, because of the quality of the cattle.

In the sixties the breed’s popularity started to steam roll. One of the contributing factors was the establishment of the National Show and Sale in 1960 which has since become an annual event.

By the 1970s a new generation of breeders were increasing their herds throughout the country. This was particularly prevelant in the development and expansion of vast areas of new cattle country in the South Island.

In the 1980s Continental breeds were influencing traditional breeders to produce bigger and leaner animals.

A significant fact is that while the original source of Herefords was Great Britain, which provided the foundation stock for many countries, in the past decade New Zealand breeders have been more inclined to look to Canada, USA and Australia for genetic improvement.

The selection methods used for importations have been widened by modern technology, with performance recording, artificial insemination and embryo transplanting enabling breeders to access the latest genetic material. Hereford cattle have adapted well to the whims and fancies of their breeders over the past century. They have fulfilled the role of land developers, chiller beef, mean and lean and now their top quality carcasses will take us through to the future. 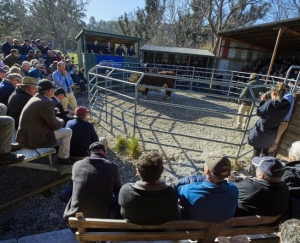 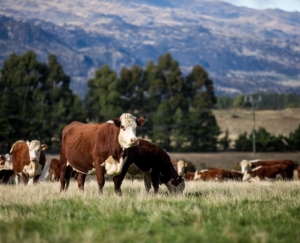 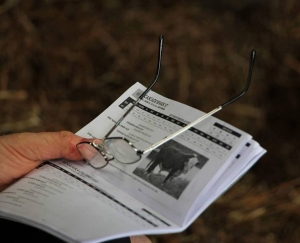